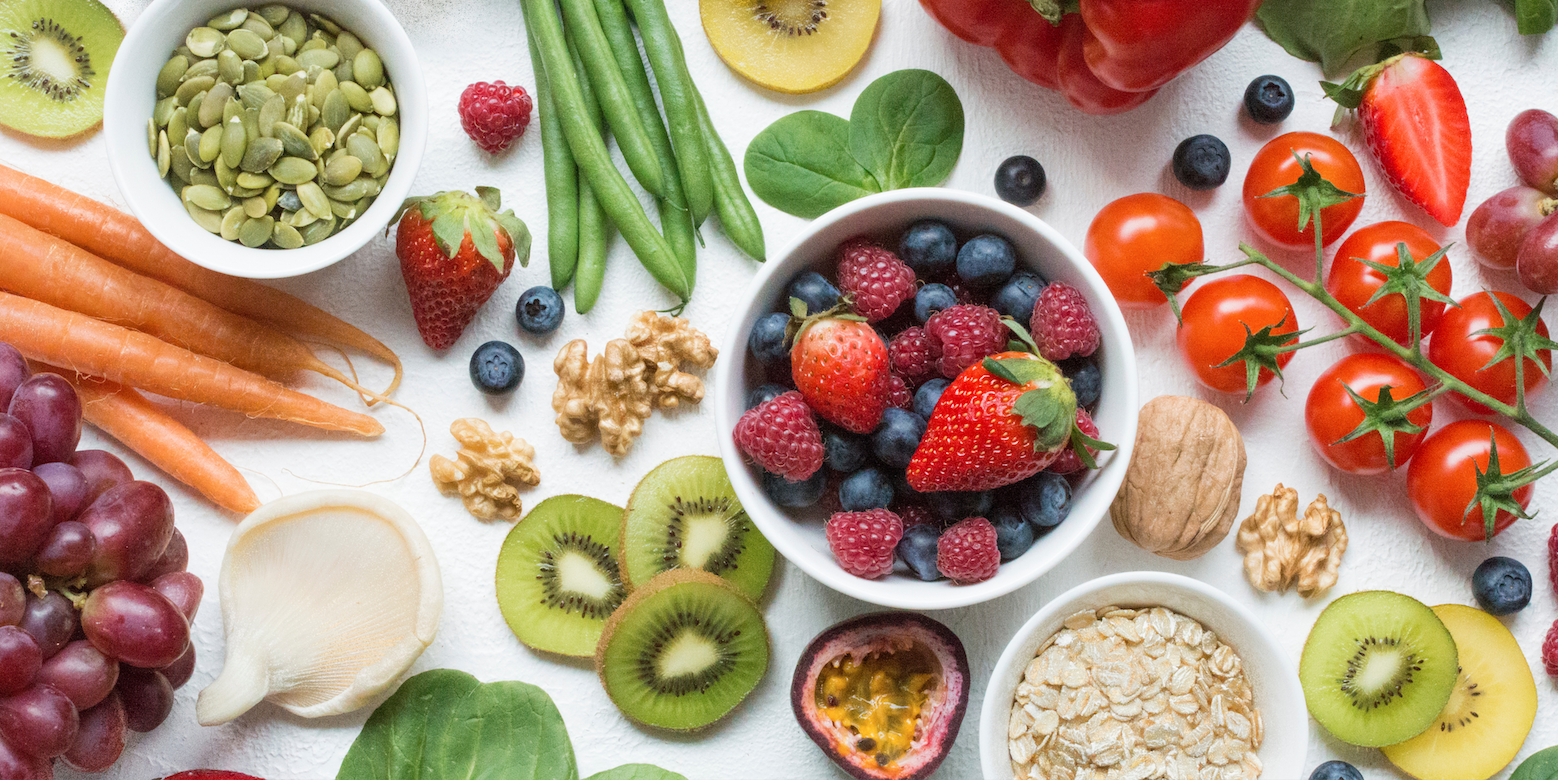 A recent study investigated the role of the personalised, 3 step FODMAP diet (restriction, re-introduction and personalisation) in affecting clinical symptoms, nutrient intake and microbiota in people with IBS.

What is the 3 step FODMAP diet?

1. Restriction – During this step, people with IBS will be undertaking a low FODMAP diet for approximately 2 to 6 weeks, by swapping foods with ‘high’ and ‘moderate’ amounts of FODMAP with ‘low’ FODMAP alternatives.

2. Re-introduction – The purpose of this step is to identify the specific sub-group(s) of FODMAPs that may trigger symptoms. While the overall diet remains low in FODMAP, the patient will re-introduce foods from each FODMAP sub-group separately.

3. Personalisation – This is when a long-term and personalised diet will be established with the patient, whereby the patient will be able to re-introduce tolerable FODMAPs and avoid ones that trigger symptoms. 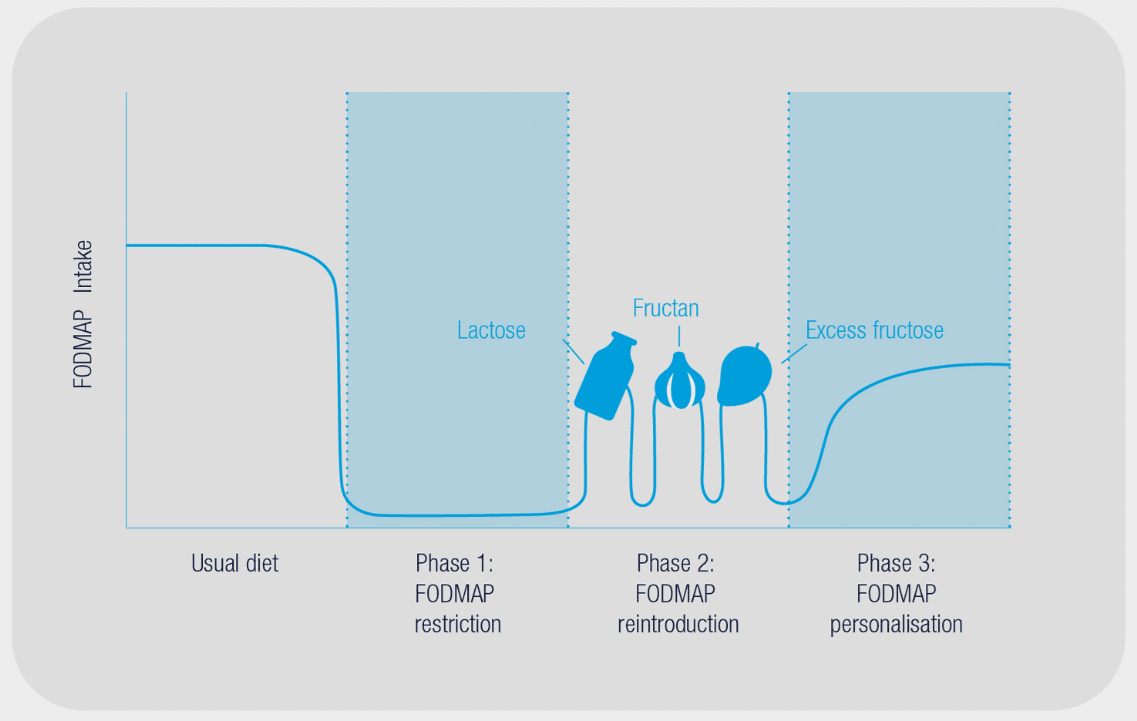 Intake of FODMAP during the 3 step diet.

Why are we interested in the role of the 3 step FODMAP diet?

Therefore, this was the first study that compared clinical symptoms, nutrient intake and microbiota in individuals with IBS, between baseline and follow-up at 12 months, after following all three steps of the FODMAP diet.

This study included 18 adult participants who were diagnosed with IBS. The majority of participants had diarrhoea-predominant IBS prior to commencing the diet (14 out of 18 participants, 78%). The 18 participants came from a subset of 104 IBS patients, who previously participated in a separate study that compared a low FODMAP diet with a sham (placebo) diet for four weeks.

Participants received in depth counselling across all three steps of the FODMAP diet and attended the follow-up visit for this study 12 months after starting the low FODMAP diet.

During follow-up, participants were asked to rate both gastrointestinal symptoms and quality of life. They were also asked to complete a 7-day food diary prior to the follow-up visit. Laboratory tests were conducted for microbiota and short-chain fatty acids (SCFA) analysis.

What did they find?

After long-term personalisation of the FODMAP diet, both total FODMAP intake and intake of individual FODMAPs, except for sorbitol, were not significantly different to baseline. This finding suggests that participants were able to re-introduce a reasonable amount of FODMAPs back into their diet by controlling the types and proportions of higher FODMAP foods they consume.

Energy, carbohydrate, protein and fat intakes were significantly lower during follow-up compared to baseline. An approximately 100 kcal of energy intake was reduced, and authors mentioned that such a small reduction may not be clinically significant on a cohort level, given that participants’ BMI did not change significantly. Iron intake was significantly reduced between baseline and follow-up.

In terms of microbiota, there was no significant difference in total bacterial abundance between baseline and long-term. The amount of Bifidobacteria, a type of ‘good bacteria’ known as a probiotic, did not change significantly between baseline and long-term. The authors suggested that the re-introduction of fructans and galacto-oligosaccharides (GOS) prebiotics may be one of the reasons that helped maintain the levels of Bifidobacteria.

SCFAs are produced as a result of fermentation of prebiotics and play an important role in maintaining overall gut health. The concentration of total SCFA decreased during follow-up, in comparison to baseline. Although the decrease of SCFA may be concerning, the authors have concluded that this finding is unclear in terms of clinical significance.

What does this study mean for the future?

The findings of this study were important because they show us that not only do we see symptom relief in the long-term following all three steps of the diet, but also maintenance of the gut microbiome. However, there is a need to conduct larger studies to investigate these findings further. This may help us better design personalised FODMAP diets that not only provide symptom relief, but are also nutritionally adequate and gut-microbiota friendly!

If you are an IBS patient and think that you may benefit from following a FODMAP diet, it is important for you to work with a registered dietitian to ensure that your nutrient intake is not compromised throughout the diet. Our Dietitians Directory is a convenient way for you to get in touch with a local Monash FODMAP trained dietitian. 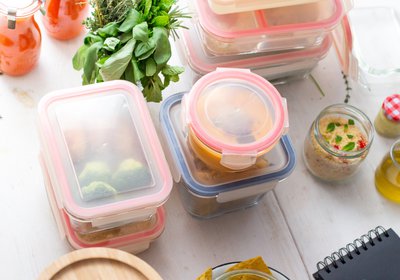 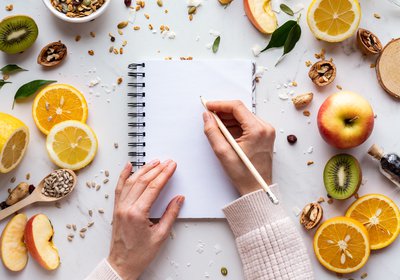 The 3 steps of the FODMAP diet