Serving size and FODMAPs – why is it so important?

Serving size and FODMAPs – why is it so important? 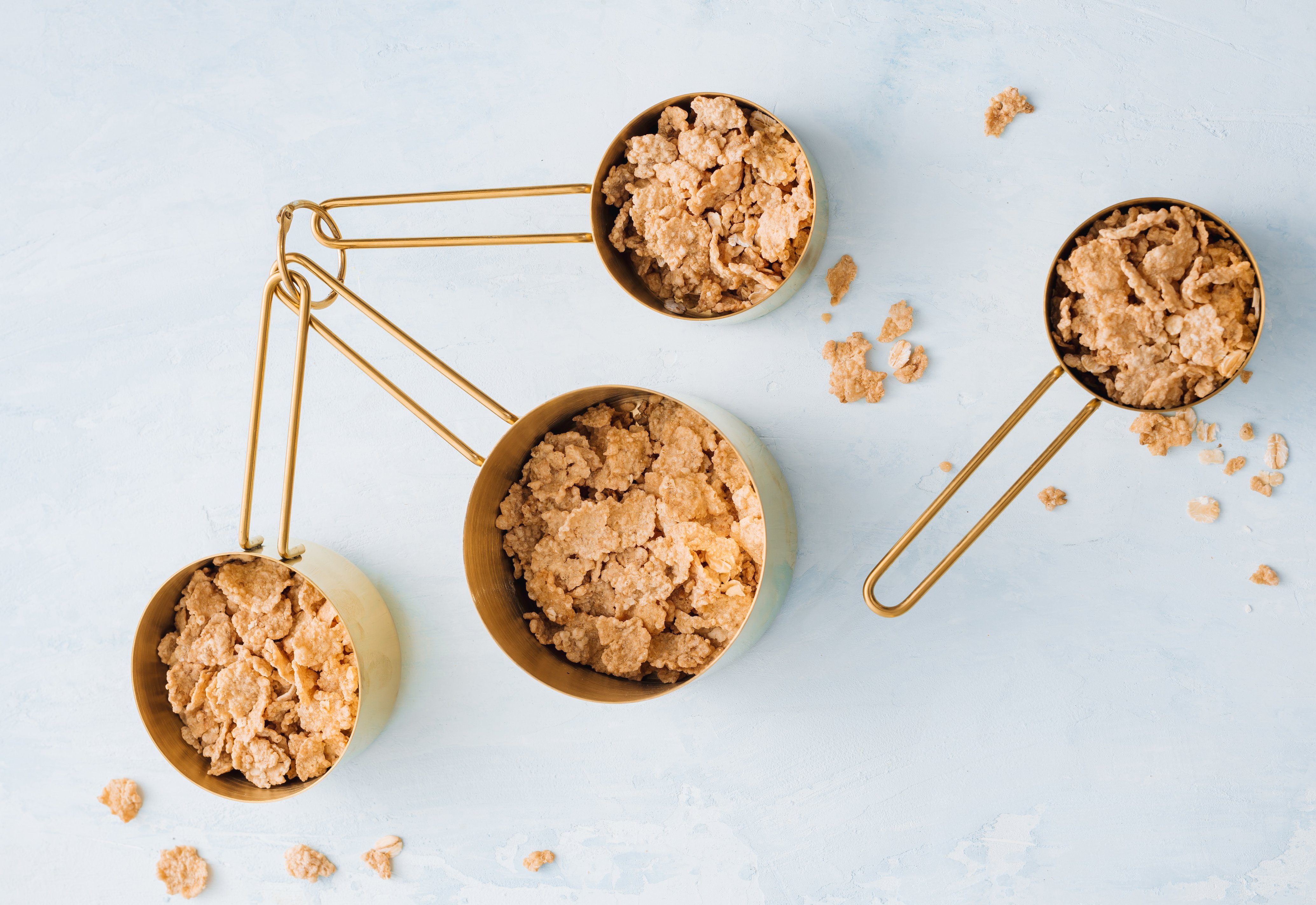 Unfortunately, when it comes to FODMAPs, it is a little more complicated than simply labelling a food as ‘high’ or ‘low’. You see, foods contain FODMAPs in various amounts; some are very concentrated sources of FODMAPs (think garlic), whilst others contain much smaller amounts of FODMAPs, even in a very large portion of the food.

It is not surprising then that how much of a food you eat will affect how likely you are to experience symptoms if you have IBS. This is because people with IBS tend to have what is called a ‘dose response’ to FODMAPs – meaning that they will only experience symptoms once a certain ‘dose’ of FODMAPs from food is eaten. This ‘dose’ will be slightly different for everyone, which is why we say that individual tolerance to FODMAPs varies. This is also a great reason to work with an experienced dietitian, who will be able to help you work out your level of tolerance to different FODMAP sugars during the reintroduction and personalisation steps of the diet.

To help you better understand this concept, let’s take a look at an example from the Monash FODMAP app…

Wheat is an ingredient that is classically considered a ‘no-go’ when following a low FODMAP diet. However, this is not always the case and is largely dependent on how much of a wheat-based product you eat.

Let’s consider wholemeal wheat bread in the app, which in the main breads and cereals category is given an overall ‘red light’. This is because a ‘typical’ serving of wholemeal wheat bread, as specified on most commercial brands is ‘2 slices’ – equivalent to what you would use to make a sandwich. 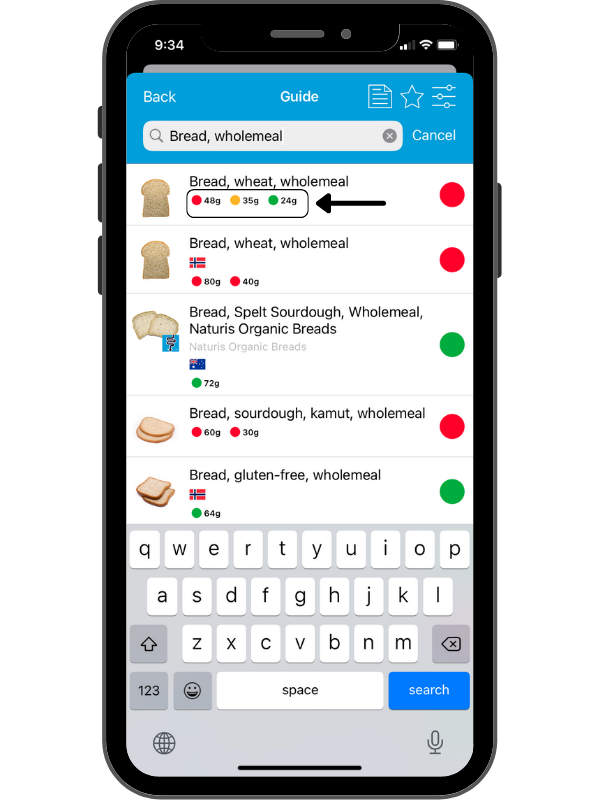 If we then look at the smaller traffic lights underneath wholemeal wheat bread, we can see that by reducing the serving size by half to ‘24g’ (i.e. 1 slice), this actually becomes low in FODMAPs. 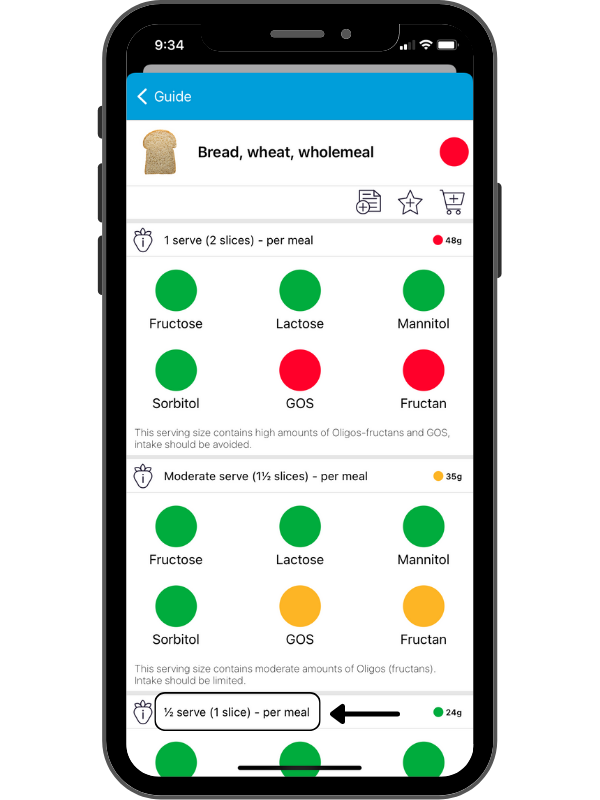 There are many other examples of foods that are high or moderate in FODMAPs in a ‘typical’ serve per meal, but low in FODMAPs in a smaller serve - wheat pasta, sweet potato, avocado, chickpeas and sweetcorn - just to name a few. The opposite is also true, where foods that are low in FODMAPs in a ‘typical’ serve can become high in larger quantities. Note that each serving size listed in the app is on a 'per meal' basis. This means that you can have a low FODMAP (green) serving of the same food multiple times at different meals spread across the day. Using wholemeal bread as an example, this might look like having 1 slice (24g) of wholemeal toast at breakfast, then another slice with dinner.

Always make sure that you refer to the smaller traffic lights under each food to see how the FODMAP rating might change at different serving sizes. You can also click into foods for more detailed information about which FODMAP(s) specifically they contain.

Working closely with a dietitian and using the Monash FODMAP app for detailed serving size information will help to ensure that you are following the least restrictive low FODMAP diet possible. 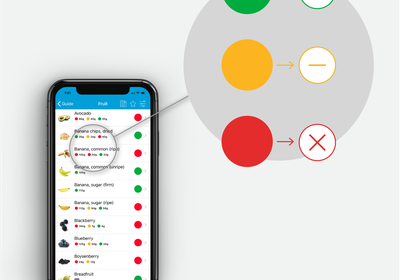 Understanding the traffic lights in the Monash FODMAP Diet App 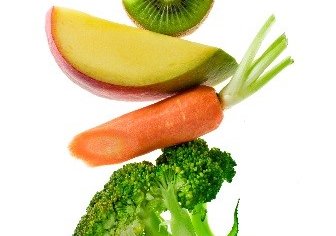 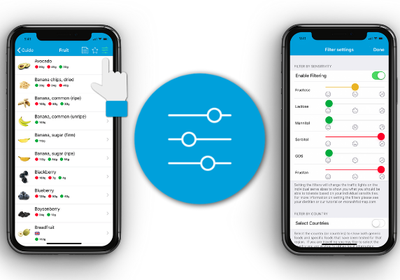 Using the filters on the Monash FODMAP Diet App